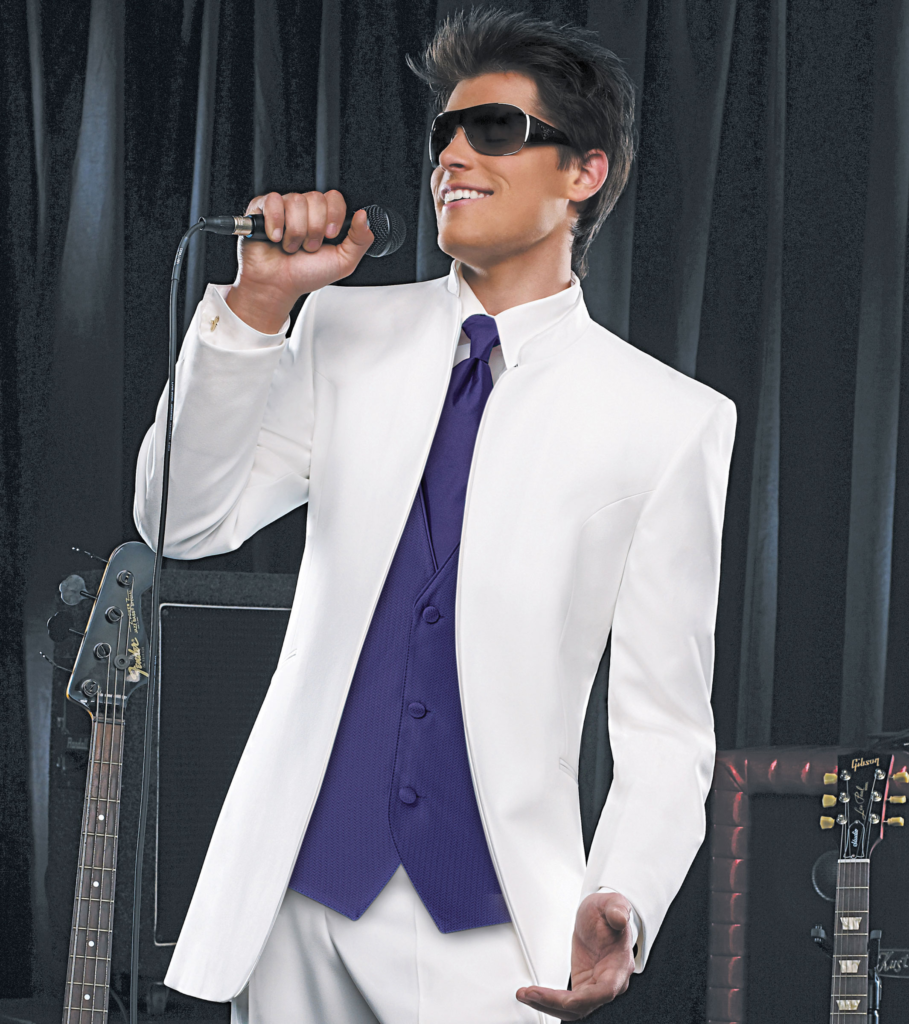 White tuxedo; cases for and against wearing one

When people walk into our tuxedo shop at Mr. Formal, they always inevitably look at our white tuxedo. And why not? It stands out among the many other black coats, and has a look of it’s own.

In fact, there are a few occasions where a white tuxedo would be heavily preferred to a black one. I’ve made note of a few of those, in the course of my employment at Mr. Formal.

The traditional catholic baptism calls for a white garment. And if the boy is over a certain age, then a white tuxedo is a favorable look. The white garment is a symbol of the purity of the newly baptized person. Therefore, picking a tuxedo that’s black, or any other color, would be inappropriate. And it’s one of those occasions where the boy involved needs to look his best.

No, I’m not talking about the girl wearing a white tuxedo. The girl usually wears a big, colorful dress.

But for the quinceanera, the girl will usually pick a male to be her ‘escort.’ And quite often, I would hear the girl ask about a white tuxedo for him. I’m not sure why this is done of what purpose it serves. All I know is that it seems to be a popular pick for this specific occasion.

Cases against the white tuxedo

For example, if you’re the kind of person that has a really pale skin tone, it probably wouldn’t look good. Guys like this would be better off picking a black, grey, or even navy blue outfit. If you have a somewhat darker skin tone, then you may be able to pull it off though. Try one on, and see if it’s something you look good in.

The biggest case against it though, is…

Unfortunately, a white tuxedo is often pricier than it’s black counterpart. This is mainly due to the fact that white tuxedos generally a much higher upkeep cost. They get dirty a lot faster, and are much much harder to clean and maintain. Especially when it comes to white tuxedo pants. You could save some money by getting black pants, and a white coat, if you must have a white tuxedo.

This isn’t just bad for the cost, either. Consider the fact that she smallest signs of dirt or other mess will show up VERY obviously on a white tuxedo. You would have to be a lot more careful when wearing one. And the risk for un-repairable staining would be much higher…a mistake that is very costly for rentals.

On the other hand, if you are going to be buying your white tuxedo, then go for it. There should be no reason they cost more to buy than black tuxedos, unless it’s just a better tux. However, keep in mind that buying one puts YOU in charge of keeping it cleaned and maintained. You’ll be dry-cleaning it a lot more frequently.